A Patron Saint for Reentry 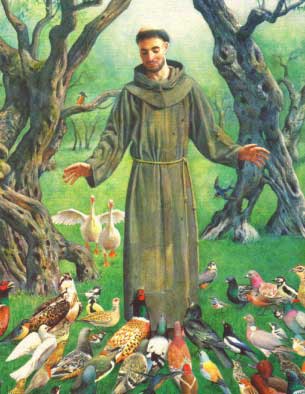 On October 4th we celebrate Francis of Assisi, founder of the religious order in which I’m a brother and one of the most popular saints of the Church. Francis is also one of our most misunderstood saints. He is remembered as a lover of nature, and people bring their animals to be blessed on his feast day. Few are aware that Francis had a tougher side to his personality.

He lived 1182 to 1226 in what is now central Italy and, after a pampered childhood, decided to pursue glory as a knight in shining armor. Francis’ military career was—shall we say—both short and undistinguished. In a skirmish with the neighboring city-state of Perugia he was captured and deposited in a prison. His biographers don’t say much about that unhappy year or so of confinement, but we do know that after release he returned to Assisi disillusioned and searching for a new direction. It was during this period that he heard the call to embrace poverty and the Gospel of Jesus.

What a perfect patron saint for prisoner re-entry! The town of Assisi was apparently not prepared to help its returning citizens, but God and the Church teamed up to make it happen. Francis didn’t readjust overnight, and it took a series of conversion experiences to get and focus his attention. He quickly began to realize that he should surround himself with a band of brothers for mutual support. Nine hundred years later this is the same re-entry formula that is guiding Our Brothers’ Keepers of Southern Illinois.

On the bright fall morning of September 11, 2001, firefighters across New York were summoned to a scene of unimaginable horror: Two hijacked airliners had crashed into the twin towers of the World Trade Center. As firefighters rushed into the burning building they were accompanied by their chaplain, Fr. Mychal Judge. Hundreds of them would die that day, among the nearly 3,000 fatalities in New York, Washington, and Pennsylvania. Fr. Judge would be among them.

In the days that followed, the story of his life and his sacrifice would become known around the world: how he had joined the Franciscans at the age of fifteen, how he had acquired a wide reputation for his ministry among the poor and homeless, alcoholics, victims of AIDS, and his outreach to the gay community and to other alienated or marginalized in the Church. There were stories about his struggles with alcohol and his recovery with the help of Alcoholics Anonymous. Many stories of his love for the firefighters, his courage in joining them on the front lines, his support as they coped with stress and sorrow. There seemed to be special meaning in the fact that Fr. Mychal was listed as the first certified casualty of 9/11. A photograph of his fellow firemen, carrying his body from the wreckage to a neighboring church became an icon of that day: an image of loving service and sacrifice, a hopeful answer to messages of fear and fanaticism.

“When I don’t know what’s next, I get down on my knees and pray, Lord, take me, mold me, fashion me, and show me what You want. Then I watch and listen and it will come.”