Pope Francis holds a special Mass for prisoners: “We can all make mistakes” 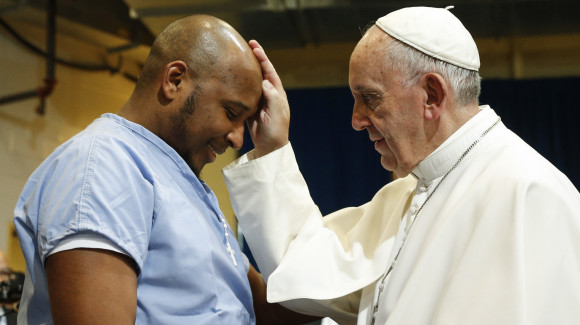 Pope Francis held a special Jubilee Mass for prisoners in St. Peter’s Basilica on November 6, telling them that all people “have made mistakes,” urging them to never give up hope in God’s mercy. Pope Francis told them that, “today we celebrate the Jubilee of Mercy for you and with you, our brothers and sisters who are imprisoned and hope must never falter.”

Pope Francis said in his homily.

“Sometimes, a certain hypocrisy leads to people considering you only as wrongdoers, for whom prison is the sole answer. We don’t think about the possibility that people can change their lives. We put little trust in rehabilitation … into society. But in this way we forget that we are all sinners and often, without being aware of it, we too are prisoners.”

Pope Francis has made it a mission of his papacy to encourage greater compassion for the most vulnerable – the poor, the sick, the elderly, migrants and prisoners. He also urged governments to consider granting amnesty to prisoners, to find alternatives to incarceration and, at the very least, to abolish the death penalty

Pope Francis concluded the Extraordinary Jubilee Year of Mercy on November 20 with an urgent request that although this special year may be over that people keep open “the door of reconciliation and pardon” in order to give hope to those who desperately need it. Pope Francis closed the Holy Door of St. Peter’s Basilica after saying a prayer of thanks to God for the gift of the past year.

Pope Francis said that God in his mercy always gives people a chance and “does not record evil that has been done or keep score of injustices experienced.” He continued, “Let us also ask for the gift of this open and living memory… Let us ask for the grace of never closing the doors of reconciliation and pardon, but rather of knowing how to go beyond evil and differences, opening every possible pathway of hope.”

Pope Francis continued: “As soon as we give God the chance, he remembers us. He is ready to completely and forever cancel our sin, because his memory – unlike our own – does not record evil that has been done or keep score of injustices experienced. God has not memory of sin, but only of us, of each of us, we who are his beloved children, and he believes that it is always possible to start anew, to raise ourselves up.”