A Long History of Engagement 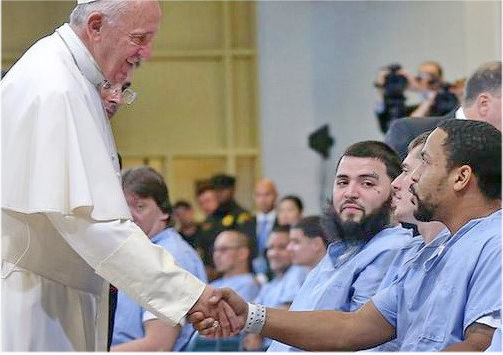 The Catholic Church in Illinois can boast of many years of involvement in prison ministry. In addition to the countless professional and volunteer chaplains who have served in places of detention, some forward-thinking individuals in this specialized vocation have shown great wisdom and leadership when these were needed. Now in our own time there is an urgency for the Church to speak prophetically for criminal justice reform.

In 1936 Bishop Joseph Schlarman of Peoria was appointed by Governor Henry Horner to chair a state Commission for the Study of Prison Reform, and its findings and recommendations are eerily appropriate even today. In a comment on gun-control, for example, the Report eloquently states that “With us guns are sold almost as promiscuously and indiscriminately as lolly-pops”. Commenting on the difficulty of focusing attention on root causes and effective solutions, the Commission observed that “The American public is very apathetic to prison administration, but highly sensitive to escapes and crimes committed by parolees or discharged prisoners. (The complete text of the Horner Commission’s report, Why Prisons?, has been republished and is available on request from Our Brothers’ Keepers of Southern Illinois.)

In the 1950’s Franciscan Father Gervase Brinkman, chaplain at Illinois Stateville, was a co-founder of the ACCCA (American Catholic Correctional Chaplains Association), and in 1960 he served a term as President of the ACA (American Correctional Association). In his address to the ACA Congress he challenged its members to “face up to certain facts about ourselves” and then be “willing to make certain very necessary adjustments”. He went on to outline future challenges that he foresaw for all groups working in criminology and concluded with a sober warning about “the complacency of good people”. In the May 1967 issue of Chap-Lett, the ACCCA journal, Brinkman co-authored “Blue Collar Crime: An Essay on Crime and Punishment in the Lower Class”.

In our own era, that has witnessed the exponential growth of mass incarceration, the challenge has been taken up by the Catholic Conference of Illinois. Its ICPJMN (Illinois Catholic and Prison Ministry Network) meets regularly to coordinate the pastoral care of its six dioceses and to advocate for needed reforms. Its members monitor legislation and policies, and they have given oral and written testimony to Governor Bruce Rauner’s Illinois State Commission on Criminal Justice and Sentencing Reform.

The Church’s concern has remained constant these many years, but the issues have multiplied. Catholic ministers continue to attend to the spiritual and corporal needs of prisoners, but they are also networking to address the causes of crime and to address its effects at all levels of society