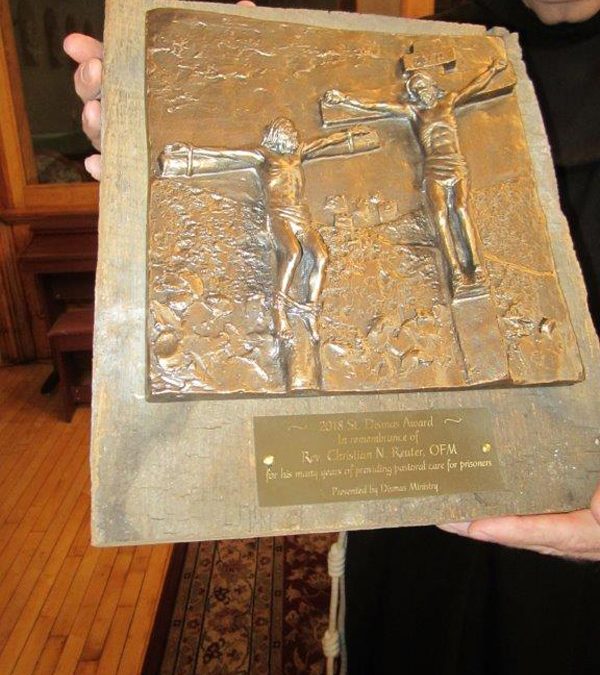 Reflections by Family and Friends at the presentation on February 14, 2019

Fr. Chris “was always getting into trouble growing up,” said his brother, Paul. “He liked to buck the system.”

Paul Reuter reflected on his brother at St. Anthony of Padua Church in south St. Louis at a prayer service and presentation of the first Dismas Award, given posthumously to his brother, a priest of the Franciscan province based in St. Louis. The Sacred Heart province accepted the award on behalf of Fr. Chris from the national Prison Ministry Coalition of Dismas Ministry. Father Reuter died June 30, 2018 at age 79 following complications from back surgery.

The Reuter boys and their sister, Roselyn Simila, grew up in St. George Parish in Affton and attended the parish school. The family had several relatives on both parents’ side who were Franciscan priests and visited St. Anthony Parish often, so it was no surprise when Christian Reuter entered the seminary. They beamed with pride when he was ordained a Franciscan priest in 1966 and when he served as a teacher, counselor and principal at Hales Franciscan High School in Chicago, which has a mission of educating African-American males and as pastor of two African-American congregations in Chicago.

Their joy continued when Father Reuter was one of three Franciscans assigned to the Belleville, Ill., Diocese in 2002 to establish a Franciscan presence in East St. Louis, Ill. Bishop Wilton Gregory appointed him to direct prison ministry for the diocese. His role was to coordinate services in 9 prisons and other jails, said Franciscan Father Carroll Mizicko, pastor of St. Augustine Parish in East St. Louis. At the time, only three or four priests and a few other volunteers visited prisons in the diocese, “and by the time he died, over 50 priests, deacons and laypeople worked in prison ministry in the diocese,” Father Mizicko said.

Father Reuter, with help from retired Bishop Stanley G. Schlarman of Dodge City, Kan., and Bishop Edward K. Braxton of Belleville, began Our Brothers’ Keepers of Southern Illinois, a re-entry center to assist returning citizens with resources and services when they leave prisons, a ministry that thrives with a reentry office in East St. Louis, IL.

At the award ceremony, Franciscan Father Tom Nairn, provincial minister, recalled that during their last visit together in the hospital, Father Reuter spoke with the sister of a man who was imprisoned and followed through on a promise to contact someone to visit her brother. “His ministry was based on love,” Father Nairn said, “a love that lets all know that they have light and need the light to shine, that they have dignity as sons and daughters of God, that they are precious in the sight of God.”

Ron Zeilinger of Dismas Ministry said that when people in prison understand they are a child of God, they grasp that they can begin a new life. Father Reuter, he said, “remains a driving force” for reform of the criminal justice system.

As a young priest of the 1960s, Father Reuter was involved in the Civil Rights movement. When the Rev. Dr. Martin Luther King Jr. came to Chicago, it was widely reported that the priest drove a truck that the Civil Rights leader used to deliver his speeches and experienced bricks being thrown at them from people opposed to the message of justice and equality for all.

Bishop Edward K. Braxton, in a statement after Father Christopher Reuter’s death, wrote: “Aswe pray for dear Father Reuter, we are mindful of his joyful, unselfish, and tireless ministry on behalf of the imprisoned and the marginalized. From this perspective, it seems providential that the name given to him at baptism was ‘Christian.’ His life truly embodied the teachings and example of the Christ-centered ministry of his patron, St. Francis of Assisi. Father Reuter reminded all of us, including the Bishops of Illinois, to become more aware of and to become more responsive to the needs of those in prison. He taught us forcefully that the person in every prison cell is Jesus Christ himself. ‘When I was in prison you visited me. Now enter into the joy of my Father!’”

Brian Nelson, who spent 12 years in solitary confinement at Tamms Super Max Prison, told the Belleville Messenger of the many times Father Chris came to see him and the other inmates. “He walked into that ugly, depressing and terrifying place, but treated all men of faith and those without faith as human beings guided by the caring hand of God as a beacon of light to wash away evil and oppression,” Nelson said.