Detainees are our fellow parishioners, Prison Ministry reminds us 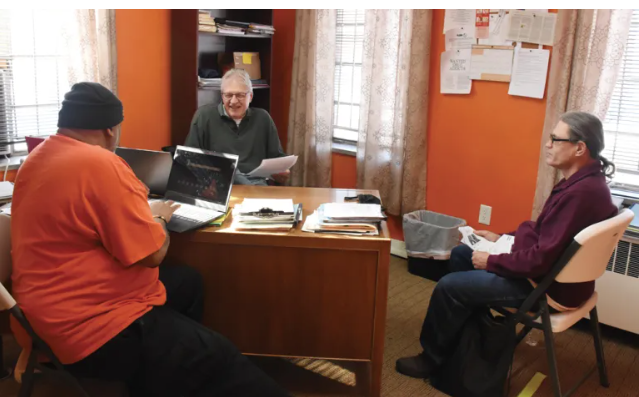 “It’s Canon Law that surrounding parishes take care of those who are in the prisons near them. Those in custody at these prisons are members of the local parish,” says Louis Slapshack, associate coordinator for prison and reentry ministry for the Diocese of Belleville.

Taking care of incarcerated parishioners’ needs—both spiritual and temporal—is the mission of the Prison and Reentry Ministry.

The spiritual isolation brought on by COVID-19 has taken a huge toll on prisoners, Slapshak notes. Prior to COVID-19 mandates, priests, deacons and lay persons could enter the prisons and offer scripture studies or RCIA classes.

These days prisoners receive weekly reflections based on the Sunday readings written by deacons and laypersons in the diocese.

These reflections are sent weekly to correctional centers at Menard, Vienna and Lawrenceville, as well as Big Muddy and Southwestern Illinois Correctional Center, and the St. Clair County Jail.

According to Slapshak, Big Muddy, Centralia and Southwestern Illinois Correctional Center have a weekly rotation of priests to provide Eucharist and Reconciliation when they are not in lockdown because of COVID-19 protocols.

“It would be ideal if two to three priests could be assigned to each corrections facility in the diocese,” Slapshak says.

However several correctional facilities do not have priests providing services at this time, including prisons in Marion, Vienna, Shawnee, Pinckneyville, Lawrenceville and Murphysboro Life Skill Center.

To help ease the isolation prisoners are enduring due to COVID, the Prison Ministry is encouraging Catholics to consider becoming pen pals with incarcerated “parishioners.”

Slapshak says the purpose of this effort is to link those in prison to the outside world in a positive way.

“The hope is that this groundwork will help citizens to a successful reentry into society,” he says. “We are all stakeholders in this effort both as Christians and as fellow citizens.”

Reentry Program
While the correctional facilities have been in lockdown during much of the pandemic, the Prison and Reentry Ministry has been busy working with ex-offenders reentering their communities.

One of those ex-offenders, Ernest Rice-Bey, now serves as a reentry program coordinator.

“When God met me, I did a complete turnaround,” says Rice-Bey. “After three prison terms, I knew I was going the wrong way.”

Throughout his five years as a program coordinator with Our Brothers’ Keepers—the group which serves as one half of the Prison and Reentry Ministry—Rice-Bey says he has used his experiences to help other people change their lives, just as he did.

As a program coordinator, Rice-Bey helps with the integration process.

“I began helping people while I was still in prison,” Rice-Bey says. “I actually was overwhelmed by the idea to help other people. It’s a pleasure serving people, especially when they are successful in turning around their lives. It’s a good feeling.”

Rice-Bey assists with the intake process for new clients, mentors clients, and helps them with housing searches or finding drug counseling in order for them to be successfully reintegrated into their community.

This holistic approach to reentry takes into account the entire individual needs that a person reintegrating back into their family and community may need in order to be successful in their transition.

OBK reaches out to all social and human services providers, faith communities, government agencies and businesses to help in the process of full inclusion.

Michael Schuette is program director at Our Brothers’ Keepers.

“There are two ways to escape the trauma of incarceration,” says Schuette. “With faith and by helping others.”

Schuette shares a story about one man who was afraid to leave his mom’s basement after being in prison.

“He found a Bible in the house and read, ‘I am with you always.’ He remembered his faith and his upbringing and could take the next steps he needed.”

The other way to escape this trauma is by doing good works. “When you are thanked and feeling appreciated, you realize you can do good,” he says.

Schuette recalls the Aristotelian principle that man is a social being.

“We all need the help of others to survive, and we all need to help others,” he says.

He acknowledges that the trauma of prison won’t go away but having faith and helping others will help.

When Schuette was 23, he started teaching literacy in prisons in Illinois. Forty-three years later, he is still advocating for persons in custody to be taught how to read.

“We’ve had a lot of success and many accolades with this program,” he adds.
• • •
For more information contact Pen Pal Ministry, P.O. Box 398, East St. Louis, IL 62202
For more information on Prison and Reentry Ministry of the diocese, visit:
• www.diobelle.org/dps/prison-ministry
• dps.diobelle.org/dps/prison-ministry/how-you-can-help
• obkministry.org 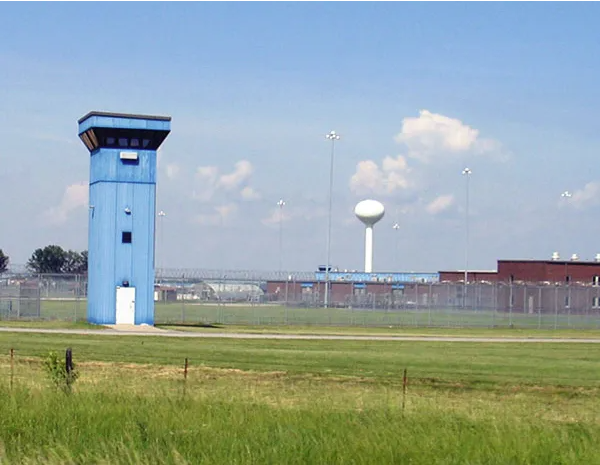 Due to COVID-19 restrictions in March 2020, the Illinois Department of Corrections closed all prisons, jails and work camp access to clergy and lay volunteers who were providing Catholic service ministry to detainees and those incarcerated.

On August 24, 2021, Father Nick Junker, pastor at St. Mary the Immaculate Conception in Mt. Vernon, enthusiastically posted on Facebook that he celebrated Mass at the Big Muddy River Correctional Center in Ina. This was the first time in more than 18 months that the men at Big Muddy could receive the sacraments.

“The men were so grateful to be able to celebrate the Eucharist after such a long time without it,” Father Junker says. “They were reverent, lively, attentive and engaged.”

During the time when Mass couldn’t be held, the men would watch the “Word on Fire” series by Bishop Robert Barron and pray among themselves.

“Though they couldn’t receive Eucharist, this would still practice their faith and grow in faith. I find that inspiring,” Father Junker says.

There are four houses in the prison. Because of COVID-19 precautions, the prisoners cannot interact with the men from the other houses. For now, each group may attend Mass once a month. Mass will be held weekly with one group at a time, until it is determined that they can attend as a larger group.

Prison and Reentry Ministry in the Diocese of Belleville has the mission of bringing Catholic service and perspective to all men and women detainees, the incarcerated and returning citizens in the 28 counties of southern Illinois.

This includes not only those confined or released from federal, state and local correctional institutions, but it also reaches out to their families, their victims, and the entire community.

The mission is based on the principles of restorative justice to respect and restore each as individuals, repair broken relationships, and contribute to the common good.

“It’s important for us to be reminded that these men are members of our parish family even though we’ve never met them and likely never will,” Father Junker says.

“In the same way, we consider the people who are in hospitals, assisted living facilities and homebound parishioners and do what we can to be inclusive and support them, spiritually and otherwise.”

In 2007, the Catholic Conference of Illinois brought together the individuals responsible for prison ministry in the six dioceses of Illinois: Chicago, Rockford, Peoria, Joliet, Springfield and Belleville.

This discussion led to the formation in 2008 of the Illinois Prison and Jail Ministry Network, which embraces all Church members and agencies whose ministries are related to all aspects of incarceration and returning citizens back into the community.

Each of the six dioceses has a coordinator of prison ministry appointed by their respective Bishop and meet frequently via conference calls, ZOOM and in-person sessions. Louis Slapshak is the associate coordinator for the Diocese of Belleville.

Father Junker says even though it’s been a long time for them without attending Mass, the 12 men who attended picked up right where they left off.

“One inmate played the organ, another worked as a sacristan to help set up and take down, and one coordinated liturgical ministry, inviting the men who were present to offer readings,” he says.

“I was moved when one inmate, who only speaks English, approached me and asked that the second reading be read in Spanish for the benefit of the Spanish-speaking worshipers who were present. The charity they showed not only to me but to one another was inspiring.”

During the prayers of the faithful, Father Junker opened the floor for them to vocalize their intentions. One of the men prayed for the people of St. Mary parish.

Father Junker offered time for confession prior to Mass. He also brought prayer resources for the men, some of which were donated by parishioners.

Father Junker shared the news that Father John Iffert had been named Bishop-elect of Covington in Kentucky.

“When I told them he had been named a Bishop and suggested we pray for him, they were incredulous and delighted! They remembered him fondly,” he says.

Father Junker says he is inspired by the older priests who have been prison chaplains for a long time. He specifically mentions Father Leo Hayes, who became a prison chaplain at Menard Correctional Facility in Chester in 1974. He retired in 1999 as a senior chaplain after 25 years.

“Their dedication speaks of them being fulfilled by this ministry,” he says.

The vision of Prison and Reentry Ministry is to see that Catholic prisoners are provided the ordinary sacramental, catechetical and other ministries of the Church, as well as put into practice Catholic Social Teachings in terms of the corporal and spiritual works of mercy.

Father Junker ended his Facebook post by saying, “Let us remember the incarcerated in prayer and be open to the possibility of change in our lives and in the lives of all redeemed sinners. God is the source of all goodness, and love is the source of all conversion. As Pope Saint John Paul II said: ‘The worst prison would be a closed heart.’”

What Is A Pen Pal Ministry?

A group of volunteers have expressed an interest in corresponding with someone in prison.

A ministry you can engage in without leaving your home, and at your own convenience.

An exchange of friendly letters provides a diversion from the endless grind of prison life.

A way of reaching out with compassion to those on the margins of society and are disconnected from the outside world.

The National Association of Catholic Chaplains and the Catholic Prison Ministry Coalition program called Pathways of Formation is for those who want to train to minister to those affected by incarceration in our prisons and jails.

The Foundational is the basic program and covers all the training needed to work in a prison and reentry ministry with the appropriate tools to provide the services the men and women need. The preparation is grounded in three dimensions of formation ministry enough to begin to discern the call to pastoral care in prison ministry: